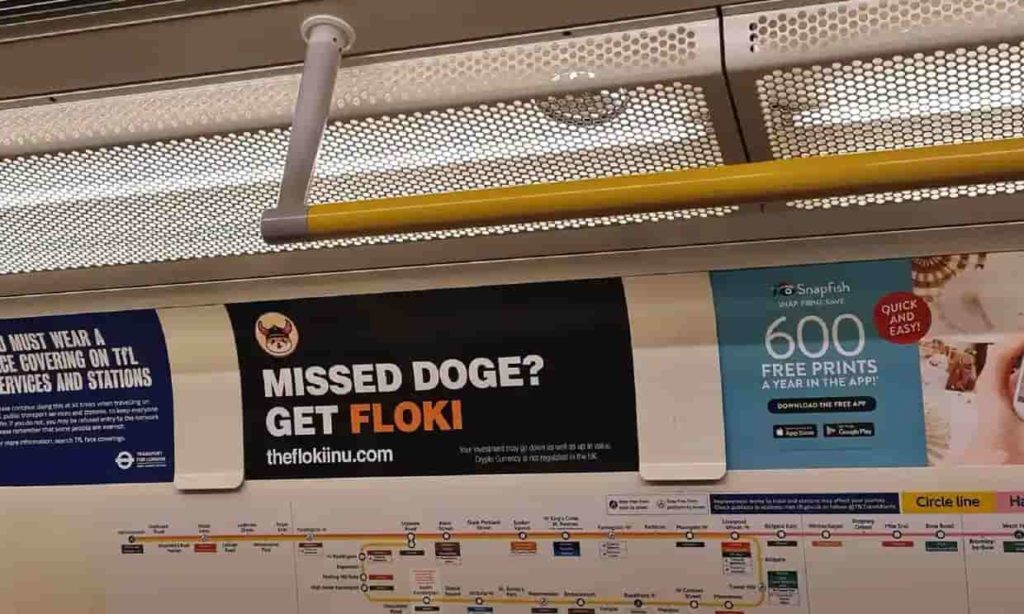 Following the completion of a three-week poster campaign for a cryptocurrency token financed by an unidentified group, Transport for London (TfL) has been asked to restrict advertisements for unregulated financial products.

In particular, on buses and at underground stations around London last month, advertisements for the Floki Inu (FLOKI) meme currency, named after a dog owned by Elon Musk, were shown on billboards in the city, as per The Guardian.

As a result of the widespread availability of the software used to create cryptocurrency coins since the introduction of Bitcoin, hundreds of other digital tokens have been created, many of which are based on jokes and online memes, such as the popular cryptos Dogecoin and Shiba Inu.

However, digital tokens and firms remain unregulated in the United Kingdom and many other nations, and some have been used in fraudulent schemes.

A member of the Green Party’s London Assembly delegation, Siân Berry, has put forward a question to Sadiq Khan, the mayor of London, over the poster campaign.

“This should have raised a red flag, and someone at TfL should have looked at this before it was approved. We have guidelines on junk food and on advertising.”

“Where the advert says ‘this is completely unregulated, you may lose all your money,’ they ought to have had second thoughts. I don’t think cryptocurrency ads should be on the network. They’re unethical.”

The individuals behind Floki Inu have not been identified as fraudsters. Still, digital tokens have been used in “pump and dump” schemes in which a small number of investors raise awareness of a currency, often with the help of online influencers, then benefit handsomely by selling their shares when the price of the coin increases significantly.

Interestingly, the FLOKI advertisements have been seen in the United Kingdom capital and in other European cities such as Amsterdam, Dublin, and Madrid, to name just a few examples.

Recently, a coin based on the Netflix (NASDAQ: NFLX) series Squid Game attracted widespread attention at the end of October, resulting in a 310,000% increase in value in a single day, reaching $2,856, according to CoinMarketCap.

However, the value of the SQUID token plummeted to zero within minutes, as the unknown scammers who created it vanished, presumably with a profit of at least $2 million, taking some investors’ life savings with them.

To combat the issue, in September, the head of the Financial Conduct Authority (FCA), Charles Randell, called on ministers to provide the FCA the authority to oversee crypto assets after Kim Kardashian was paid to promote Ethereum Max, a token that had been launched a month earlier by unknown developers.