British police have confiscated cryptocurrency totaling £180 million ($249.35 million) as part of an investigation into money laundering following the transfer of dirty money into digital assets by criminal organizations.

On Tuesday, July 13, London police said they had confiscated £180 million of an unnamed cryptocurrency after the discovering the illegal funds on Saturday, July 10.

The Met’s economic crime command seizure is thought to be one of the world’s largest seizures. It surpasses the confiscation of crypto worth £114 million by UK Police on June 24 as part of an investigation into money laundering; British police have now confiscated a record amount of crypto totaling £294 million ($408 million) since gathering intelligence regarding the transfer of illicit assets.

After the initial haul was discovered, a 39-year-old woman was detained on suspicion of money laundering and questioned in relation to the £180 million crypto discovery on Saturday, July 10.

“Today’s seizure is another significant landmark in this investigation which will continue for months to come as we hone in on those at the center of this suspected money laundering operation.”

The investigation carries on

The assets were confiscated by the police force’s economic crime command, and the investigation is still ongoing.

Some of the world’s most prominent criminal groups have exploited anonymity provided by cryptos to launder money and keep one step ahead of the police, tax, and security agencies.

As a result, the London Metropolitan Police has previously shown interest in getting more legal powers to confiscate and freeze offenders’ cryptocurrency holdings. 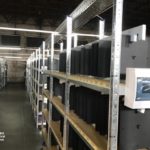