The CEO of financial advisory firm Verde Capital Advisors Leo Kelly has said that it is a stretch for several jurisdictions globally to declare Bitcoin a currency due to ‘absurd’ volatility.

Speaking to Fox Business, Kelly suggested that Bitcoin losing about 20% in a single day is enough reason not to declare it a legal tender.

He made the remarks after El Salvador officially adopted Bitcoin as a legal tender on Wednesday with the asset reacting by losing value with an almost $300 billion wipeout from its market cap.

Kelly compared Bitcoin’s volatility to the Mexican peso crisis that suffered a fall devaluation of about 13% in 1994.

“When it was declared a currency by El Salvador, um, several of the experts came out and said, this is a, this is a game-changer. This is a replacement for fiat currencies. Well, it moved 20% of the day. The Mexican peso crisis was a 13% move, and that was a full devaluation. So I’m not really sure why this absurdly volatile asset is a replacement as a currency. That’s a stretch,” said Kelly.

According to Kelly, Bitcoin alleged legitimacy has been debunked over time. He notes that Bitcoin has not proven itself as a store of value to replace gold due to its volatile historical nature.

Interestingly, several Bitcoin proponents believe that with the growth of cryptocurrencies and institutions’ entry, the asset is in line to replace gold as the ultimate store of value.

Kelly added that the recent volatility should not come as a surprise with reference to Bitcoin’s 2017 rally that saw the asset hit a high of $20,000 but later plunged to $3,000.

He maintained that Bitcoin has no chance of being a currency because it lacks solid backing.

Following the Wednesday flash correction, Bitcoin gained ground trading at $47,200 by press time with gains of almost 2% in the last 24 hours. 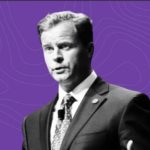