There has been a monumental inflow of capital into digital asset markets this week as Bitcoin registered its highest ever price.

Over $80 billion has entered the space since Monday bringing the total market capitalization to its highest level for almost three years at $640 billion. The figure, which represents the combined total valuations of all crypto currencies, touched $680 billion on Thursday, Dec. 17 when Bitcoin made its all-time high according to Tradingview.com.

It has not been at this level since January 2018 when it topped $830 billion, but the difference back then was that Ethereum and most of the altcoins were also at their highest ever prices.

This time around it is only Bitcoin making those massive gains as Ethereum and XRP are still 56% and 82% down from their peaks respectively.

Bitcoin hit a record high of $23,750 in late crypto trading on Dec. 17 and this marks a monumental gain of 26% since the beginning of the week. Since last weekend, Bitcoin has increased in value by almost $5,000 outperforming pretty much every other traditional asset by a clear margin.

The massive move has attracted the attention of mainstream media such as Bloomberg and CNBC with largely ill-informed pundits calling it a bubble (again) and questioning the supply (which is mathematically set in stone).

Facebook’s David Marcus also commented on the major coverage that mainstream outlets are now giving the king of crypto;

“CNBC is now talking about Bitcoin more than any other asset out there. 2020 is really the year BTC crossed the chasm to become a legitimate asset for many who previously wouldn’t touch it or even bashed it.”

MicroStrategy founder, chairman, and CEO, Michael Saylor has been uber bullish on Bitcoin since his firm’s massive investment in the asset;

“Bitcoin is a bank in cyberspace, run by incorruptible software, offering a global, affordable, simple, & secure savings account to billions of people that don’t have the option or desire to run their own hedge fund.”

The Bitcoin effect has managed to lift the majority of crypto assets though most of them are still a long way off their own record price highs. Ethereum reached its highest level since May 2018 topping $650 this week but it has a long way to go to reach that eye watering high of $1,400 back in January of the same year.

Today’s moonshot is coming from Litecoin, which is often dubbed the silver to Bitcoin’s gold. LTC has surged a whopping 18% over the past 24 hours to top $110 as it chases its big brother. 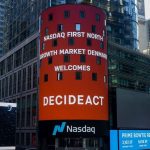