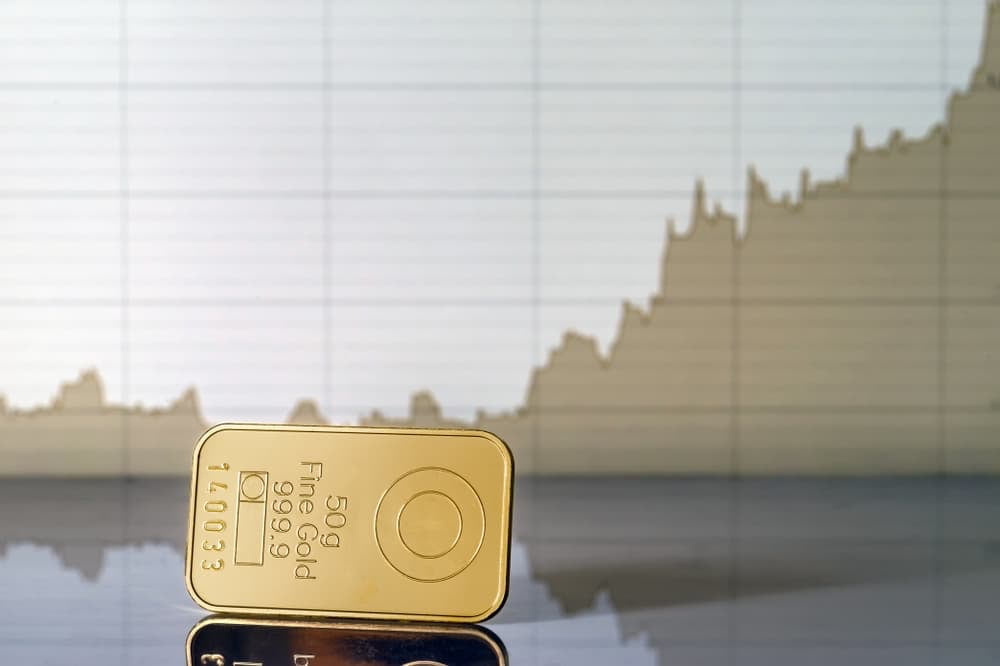 The price of gold increased to a 13-month high on Thursday, February 24, as a result of Russia’s invasion of Ukraine.

The precious metal has seen a gradual influx into the asset in the last month as tensions continue to rise Spot gold increased 1.9% to $1,971.14 per ounce by 05:29 NY Time, its highest level since early January 2021.

According to data acquired by Finbold, as of February 24, 2022, the total market capitalization of the yellow metal is $12.494 trillion with a $1,967 price per ounce up 2.96% on the day at the time of publication, according to CompaniesMarketCap statistics.

When employing a web archive tool Wayback Machine, we were able to determine that as of January 21, the price of gold stood at $11.629 trillion $1,831 price per ounce. Thus, a total of $0.87 trillion has been infused into gold in the last 30 days as tensions began to escalate in Eastern Europe.

Gold a safe-haven in war

Apple headset likely to be announced in January; How will it impact AAPL stock? Why Eli Lilly & Co could be a recession-proof stock Number of cryptocurrencies reach 20,000 setting a new record amid volatile markets

In general, Gold is viewed as a safe-haven asset amid rising geopolitical tensions between Russia and Ukraine, and its price has climbed accordingly.

It’s worth noting that Russia is one of the largest producers of gold in the world. Additional sanctions imposed by the West on Russia might exacerbate the difficulties in the global supply chain.

Finbold had reported in December that Russia’s gold and forex reserves hit record highs. Following the 2014 oil price crisis in Russia, their reserves plummeted to their lowest level since 2008.

However, Russian gold and foreign currency reserves have almost doubled in the intervening period. Holdings had surpassed the $500 billion target level established by the regulator in June 2019 and have stayed over that level ever since then.

Gold is the asset to own during war

If you’re looking for a safe haven in these turbulent times, gold is your best bet, according to US Global Investors CEO Frank Holmes.

“When you look at gold, its breadth and depth of historical significance as a wonderful asset is really showing up when you have war. Bitcoin is a new phenomenon. <…> Historically, it’s been gold, and I would stick with that. Once we get more regulations that come into the crypto ecosystem, then Bitcoin will take on as another next leg of interest globally,” said Holmes.

As a new asset class, Bitcoin has yet to establish its worth, Holmes said, even though it has emerged as a promising alternative.

The invasion caused an instant sell-off that resulted in nearly half a billion dollars in losses for the cryptocurrency market, but renowned crypto trading analyst Michael van de Poppe shares a similar perspective with Holmes, although he believes Bitcoin will ultimately recover.

“What I simply don’t understand is the fact that Bitcoin is dropping in these times, actually. I mean, it’s a risk-on asset, but if you think about it a bit more, it’s designed for these situations, no? So, perhaps in the short term it’s affected by the price dropping south, but after a while it will start to rally,” he tweeted.

What’s next for gold

Experts now believe the price of gold may now go up as high as $1980 and then $2,000 per ounce levels the sharp rise brought about by the escalating tension in the Russia Ukraine crisis.

A significant increase was also seen in the price of other precious metals traded on the Multi Commodity Exchange (MCX). In a similar vein, the commodities market was gaining momentum. Global stock markets, on the other hand, were trading in the red as of Monday morning.

“As heartbreaking as the events in Ukraine are, markets have seen plenty of wars over the years and will recover. Yes, there will be short-term volatility, potentially extreme, but any loss is a paper loss unless you sell.”

Meanwhile, the Moscow stock exchange (MOEX Russia Index) was down 33% immediately after reopening after being suspended earlier in the day. On the whole, Russian equities have suffered their biggest ever decline, with some stocks falling by as much as 45% in total.

Overall, between January 18 and February 24, Russia’s largest companies have lost over $100 billion in market capitalization as geopolitical tensions began to escalate in Eastern Europe having an instant effect on Russian equities.