Bitcoin (BTC) has been pronounced dead 37 times so far in 2021, according to statistics from 99Bitcoins, the official obituary for the flagship digital asset.

Interestingly, the number of times Bitcoin was proclaimed dead in 2021 is remarkable since it is twice as many as in 2020, which was 14 times in total.

Since 2010, the website has served as the official repository for all Bitcoin obituaries, with the site using precise criteria to determine what exactly qualifies as an obituary in each case.

What is a Bitcoin obituary

In order to decide whether or not an obituary is acceptable for publication on the site, the following criteria are used:

“The content itself (not just the headline) must be explicit about the fact that Bitcoin is or will be worthless (no “maybe” or “could”).”

In addition, the content must be produced by someone who has a large following or by a website that gets a lot of traffic.

It is worth noting that, for the time being, you may only submit obituaries in English; as a result, the issue of how many total Bitcoin deaths there would be online arises.

Coincidentally, the most recent death recorded occurred on September 21, 2021, and was announced by the renowned economist Steve Hanke from John Hopkins University, who said that “Bitcoin is nothing more than a highly speculative asset with a fundamental value of ZERO.”

Many events have occurred this year that have had a negative impact on the Bitcoin price, including Elon Musk’s announcement that Tesla (NASDAQ: TSLA) would no longer accept Bitcoin payments due to concerns about the increasing use of fossil fuels for mining and transactions, which came as a surprise to many investors.

In addition to the Chinese government’s crackdown on cryptocurrency mining, a bipartisan bill in the United States was put forward in the Senate that would generate money by imposing stricter tax restrictions on cryptocurrency transactions are noteworthy.

Not to forget, China’s central bank has announced a new set of cryptocurrency crackdown measures on Friday, including the banning of what it calls illegal activities around using digital currencies.

The bank has prohibited foreign exchange from offering its services in mainland China over the internet. According to the People’s Bank of China, it would increase the speed it monitors the new rules to improve their effectiveness.

Lynch, who thinks Bitcoin has antifragile properties, compares it to the Kenny character, who typically comes back to life after dying in each episode.

His words come after one of the most turbulent weeks of the year, with Bitcoin dropping almost 10% on Monday. However, the rebound momentum of the asset was halted on Friday when Chinese officials announced the new restrictions previously mentioned on cryptocurrency trading. 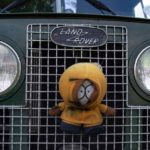 Morgan Stanley's Lynch: Bitcoin is like South Park's Kenny, dies every episode but comes back