The effect of the cryptocurrency sector’s ongoing volatility has been highlighted by Bitcoin’s monthly Relative Strength Index (RSI), which has hit its lowest point on record.

As of June 13, Bitcoin had hit the lowest RSI at 43.7, which is almost 60% below the monthly all-time high value, data provided by crypto analyst PlanB indicates.

The last record low RSI was recorded in January 2019 at 43.9 when the flagship cryptocurrency was trading at $3,4000. Another significant historical bottom was registered in January 2015 at RSI 44.6 when Bitcoin was valued at $210.

Notably, the RSI metric is a momentum indicator deployed in technical analysis. It examines the magnitude of the latest price fluctuations to determine if or not the value of a cryptocurrency is overbought or oversold.

The oversold condition which can also be interpreted as a stochastic oscillator refers to a situation where Bitcoin has traded at a lower price and there is a possibility of a rally. In most cases, there is no specific timeline for a rebound.

With Bitcoin hitting the lowest RSI, it is perceived the flagship cryptocurrency has entered the oversold region after failing to maintain gains above $30,000 over the weekend.

Bitcoin on a free wall

The RSI drop is a culmination of Bitcoin’s brutal start to the week, with the asset losing its value by over 17%. By press time, the asset had hit a yearly low of $23,200. On the weekly chart, Bitcoin had corrected a massive 25%.

Bitcoin’s dwindling fortunes come in the wake of rising inflation hitting a record high of 8.6%, with anticipation the Federal Reserve might use the data to raise interest rates.

In recent months, Bitcoin had indicated signs of bottoming out around the $30,000 level, but worrying inflation data has done little to cushion the free fall.

The correction also aligns with an opinion by several market experts who are projecting the asset might hit lows of below $20,000. However, there is a general market consensus that Bitcoin will embark on another bull run after the current dip.

Bitcoin’s massive correction has also influenced the general market. As reported in Finbold, the crypto market has wiped out over 55% in capital plunging to below $1 trillion for the first time since January 2021.

Overall, most of the crypto market continues to trade in the red zone, but Bitcoin has maintained its dominance at 44.56%. 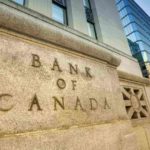 Bank of Canada: Number of Canadians holding Bitcoin doubled in 2021