Do Kwon, the CEO of Terraform Labs, a crypto ecosystem that caused significant losses for investors when both its stablecoin TerraUSD (UST) and native token Terra (LUNA) collapsed, has finally appeared in public for his first interview since the project’s $45 billion implosion.

On August 14, cofounder host at Coinage Media Zack Guzmán tweeted a teaser trailer of an interview with Do Kwon in the aftermath of the Terra Luna collapse. In the teaser trailer, Kwon begins by saying:

“Terra was supposed to be a stablecoin, and it didn’t remain stable. Therefore, it must be a fraud, and must be a scam. Crypto is still sort of like the wild wild west. I think I developed like sort of, an alter ego.”

When questioned by Guzmán about whether ‘it’s tough for him to watch’ his past comments, Kwon responded:

“Yes, but the algorithmic stablecoin was starting to become industry standard. I bet big and I think I lost.”

During the interview, Kwon was questioned about the allegations of fraud leveled against him. Guzman argues that Elizabeth Holmes, the CEO of Theranos, knew her technology did not function but continued to market it anyhow.

Theranos gained notoriety for marketing a device that, according to the firm, could diagnose a range of diseases with a single drop of blood. The technology was a pipe dream. According to the interview’s preview, Kwon will answer suggestions that he is just crypto’s equivalent of an Elizabeth Holmes.

The demise of the Terra ecosystem has had widespread repercussions, and investors have suffered significant losses as a result. And recently, Korean prosecutors conducted a search warrant at the home of Daniel Shin, a cofounder of Terra. Although he has distanced himself from Do Kwon and the Terra project.

Twitter persona and crypto whistleblower FatManTerra claims to have insider knowledge on the Terra project. During and after the collapse of the Terra ecosystem, he disclosed a significant number of confidential papers. About the interview with Kwon, he stated:

“Do, why not have an interview with someone more neutral and respectable like Bloomberg or Fortune instead of someone who has been consistently shilling you for *years*, almost as if he’s paid? And will you address the billions you cashed out of the system?”

To which Guzmán replied:

“@FatManTerra more respectable? I was a user of Terra just like you were. Also kinda shady that you are acting like I didn’t try to reach out to you for this. Of course, I covered Terra. It was either always going to be either crypto’s biggest success or its biggest failure.”

Fatman also denied that Guzman had reached out and added, “I wouldn’t quite say you ‘covered Terra.’ I would say you shilled Terra and Do Kwon for a very long time.”

Finally, in July, South Korean prosecutors investigating the collapse of Terra asked that the Ministry of Justice issue a “notice upon arrival” for Do Kwon and a travel restriction for Terra cofounder Shin Hyun-seong.

Investigators from the Seoul Southern District Prosecutors Office raided several local crypto exchanges, including Upbit, seizing transaction records and other material in July as part of the investigation into the circumstances that led to the demise of the Terra platform.

Meanwhile, the Minister of Justice for South Korea, Han Dong-hoon, flew to New York, where he met with authorities from the United States to examine potential avenues of collaboration between the two nations in investigating criminal activity related to digital assets. 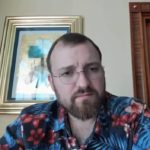 Cardano founder on Vasil: 'The ship is steady and brighter days are ahead’