Data provided by crypto intelligence platform Coinmetrics.io indicates that as of June 2, the ethereum annual inflation rate of 4.2% was higher by 10.52% compared to dogecoin’s 3.8%. Since 2019, ethereum’s annual inflation dropped past DOGE only in January last year.

Despite recording a drop, ethereum’s inflation rate has come under scrutiny in recent years—the point of contention on the number of changes made to ETH issuance.

However, the ethereum inflation rate should significantly decline with the transition to Ethereum 2.0’s staking mechanism.

Following the upgrade, ethereum will likely experience a near-zero percent increase in the total supply. In this case, there a greater potential for asset demand to outstrip its growth in supply resulting in a further increase in value over time. The upgrade will put ethereum in the same category as bitcoin based on supply inflation.

Over the recent months, ethereum has witnessed increased attention in the booming DeFi and NFT markets. On May 12, ethereum attained a new all-time high of $4,328.

Elsewhere, the dogecoin inflation rate has been on a steady downward trajectory. Notably, upon launching the meme crypto, a supply limit of 100 billion tokens was set.

However, DOGE developers removed the limit supply to promote the use of the token and discourage ‘hodling.’ As a result, dogecoin currently has an infinite inflationary supply with $5 billion DOGE per year.

The steady drop in DOGE inflation aligns with the existing fixed reward divided by a growing capital base. Interestingly, backers of DOGE believe the token might turn into a standard currency due to the design meant to increase supplies with a set obsolete rate.

DOGE is among digital assets that have recorded a surge in value and a number of DOGE-made millionaires in 2021, correlating with the general market sentiments. However, the coin received a boost following the endorsement from Tesla CEO Elon Musk. Musk has constantly shown support for token integrating it into his other SpaceX operation through his Twitter account. 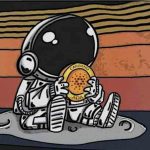