Following the collapse of the FTX crypto exchange, the platform’s founder Sam Bankman-Fried (SBF)has formally been charged in court over his role in the incident that resulted in losses running into billions.

At the moment, SBF has been granted a $250 million bond, a decision that has since resulted in criticism from industry players. Amid questions on how the bond deal was reached, lawyers representing Bankman-Fried have asked the judge to keep the names of individuals who guaranteed the bail secret.

As things stand, Bankman-Fried is expected back in court on January 3, where he will formally enter a plea.

Interestingly, sources close to the matter indicate the former FTX CEO will plead ‘not guilty’ in the high-profile case. Previously, while on a media tour, Bankman-Fried acknowledged the shortcomings of FTX, but he has stressed he is not criminally liable.

He will take a plea before a new judge, Lewis Kaplan, who was reassigned the case after the original judge recused herself, noting that her husband’s law firm had advised FTX before the collapse.

However, controversy is brewing regarding the total assets seized from FTX by Bahamas regulators. In this case, The Securities Commission of the Bahamas (SCB) had initially claimed it seized over $3.5 billion in cryptocurrency from FTX. In a rejoinder, FTX alleges that digital assets seized were worth just $296 million and not $3.5 billion.

As a reminder, United States prosecutors have charged Bankman-Fried with what they termed ‘fraud of epic proportion’ where he is accused of embezzling customer funds to benefit his trading firm Alameda Research. Furthermore, SBF allegedly used customer funds to buy real estate and make political donations.

In his first court appearance, Bankman-Fried was charged with two counts of wire fraud and six counts of conspiracy, such as money laundering.

Besides the prosecution by the United States regulator, SBF and former FTX promoters are also facing an $11 billion consumer class action.

Additionally, as SBF plans to take a plea, former Alameda CEO Caroline Ellison and ex-FTX chief technology officer Gary Wang have pleaded guilty over their roles in FTX’s collapse. They have since agreed to work with the prosecution in the matter.

Even though investigations into the collapse are ongoing, Bankman-Fried is still plagued by allegations of suspicious funds transfer. For instance, crypto wallets owned by Alameda began transferring funds a few days after SBF posted bail. However, the embattled founder has denied any involvement in the transfer.

“None of these are me. I’m not and couldn’t be moving any of those funds; I don’t have access to them anymore,” he said.

In the meantime, if Bankman-Fried is found guilty, he faces decades in prison. It is worth noting that Ira Lee Sorkin, the lawyer representing the perpetrator of the largest individual Ponzi scheme, Bernie Madoff, warned that the FTX founder faces ‘many, many years in prison’ if found guilty. 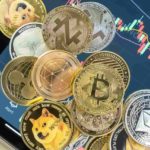 Top 10 cryptocurrencies by GitHub development activity as of January 2023