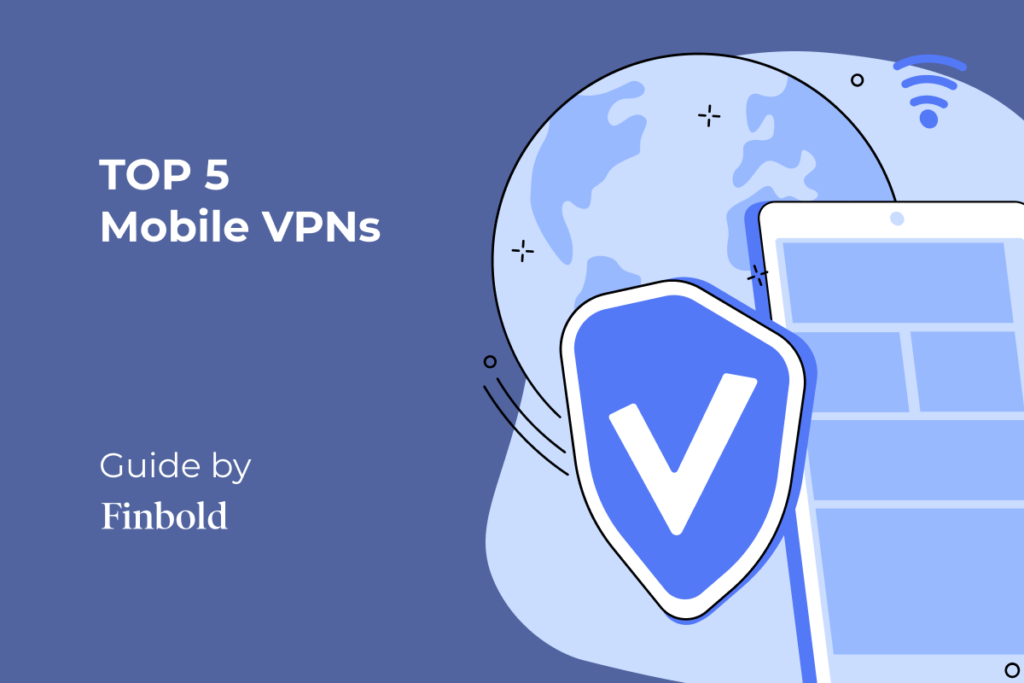 In this guide, we will examine the top 5 mobile VPNs in 2022 by first analyzing the major benefits of using VPN and then assessing the different features of each VPN company. You will learn about the main products that each provider offers, as well as their privacy and security aspects.

Virtual Private Network (VPN) technology has been available for a few decades, but its popularity has lately surged. VPNs are used among individuals who want to disguise their actual location in exchange for enhanced security and privacy or to circumvent certain restrictions.

Indeed, the VPN industry is expected to grow, reaching 75.59 billion U.S. dollars by 2027. Meanwhile, according to the Security.org VPN usage 2020 report, 69 % of internet users in the United States over the age of 18 utilize a VPN service for personal or work-related purposes.

The current Coronavirus pandemic has also acted as a catalyst, raising public interest in VPNs as quarantined countries throughout the world commenced remote work. Additionally, as more people are becoming home-bound, the demand for streaming and gaming has also grown, necessitating an increasing interest in VPN providers.

What is a VPN and how does it work?

VPN is an encrypted connection over the Internet whereby a private internet user can extend one’s access to shared or public networks. Strictly speaking, a VPN encrypts your internet traffic by concealing your IP address and physical location, allowing the user to hide their tracks from any third-party intervention.

The service works by establishing encrypted data tunnels between the user’s home network and the proxy servers of a VPN provider. This means that an individual’s IP is replaced with the VPN’s IP address, implying that neither your internet provider nor any hackers or cybercriminals can access your web browsing activities or personal data, such as passwords, card details, or similar information stored online.

Simply explained: What is a VPN and do I need one?

Why People use VPN

The increased adoption of VPN by internet users is due to a multitude of factors. First and foremost, the general population is becoming more aware of the possible security risks associated with the Internet. With countless data leaks occurring on a daily basis, people take precautions to safeguard their online identity and data. As a result, using a VPN to connect to the Internet allows you to encrypt your data, giving an added degree of protection and peace of mind.

Furthermore, using a VPN allows users to bypass geo-restrictions. This is especially popular among individuals who want to watch Netflix, Amazon Prime, or other comparable services while also accessing country-specific content.

Finally, with many employees working remotely, especially since they are unable to return to their jobs due to the pandemic, having a VPN may help with remote access difficulties while also allowing safe sending and receiving of important company data.

The benefits of using VPN

Opting to use a VPN can provide a number of advantages, as summarised below:

Having covered the fundamentals and the benefits of VPNs, we will delve deeper into the top 5 VPN services worth considering.

Atlas VPN is a freemium VPN service based in Delaware, United States, that provides both a free and a premium subscription. The VPN has over 700 servers in 28 countries and offers apps for Android, iOS, macOS, Windows smartphones, tablets, and desktop PCs.

The firm provides a fast, comfortable, and anonymous Internet browsing experience for over 5 million customers, removing some of the technological complexity that may intimidate novices and those less familiar with VPNs.

Atlas VPN Premium is known for its high-speed performance and infinite connection capacity, in conjunction with a Safebrowse and a safety check-up function.

There are no internet connection speed constraints as users get access to 32 locations and 700+ servers worldwide geared for ultra-fast 4K streaming. Also, users may additionally use Atlas VPN on an unlimited number of devices at the same time while also having access to 24/7 customer support.

Below is a list of the key features of Atlas VPN:

You can download Atlas VPN and try it for free here to enjoy unrestricted online access, privacy, and security, or additionally upgrade to the premium version to unlock all of the app’s features. Find out more about Atlas VPN products and services by reading our comprehensive Atlas VPN review.

ProtonVPN is a Swiss-based firm with over 1255 servers in over 55 countries and a 1,468 Gbps capacity. The firm claims to be the ‘World’s only community supported secure VPN service.’ The ProtonVPN initiative arose from a desire to safeguard better activists and journalists who use ProtonMail.

The company’s values are honesty, transparency, security first, technical excellence, community, and privacy & security for everyone.

The company offers a no-logs policy; all apps are open source and audited, with high-speed connections (up to 10Gbps). Your Internet connection is secured when you use ProtonVPN to surf the web. Moreover, ProtonVPN’s sophisticated security measures ensure that an attacker cannot monitor your connection by passing it through encrypted tunnels. In addition to it enabling you to view websites that may be restricted in your country.

Below is a list of the key characteristics of ProtonVPN:

Based in the United States, Betternet VPN is a subsidiary of the Pango group, which also operates several other VPN services. The company has a global user base of more than 38 million people and provides specialized VPN applications on Windows, Mac, iOS, and Android.

There are over 3.3 million applications available on the Google Play and App Store, and in less than a year, Betternet has become the number 1 downloaded in the VPN app charts. Moreover, the firm’s proprietary VPN applications for mobile devices are straightforward to set up, user-friendly, and can successfully shield your IP address by encrypting your data.

As no registration is required when using Betternet, customers can speedily get the app up and running. The firm implements industry-standard AES-128 and AES-256 ciphers to encrypt traffic, while its Virtual Location feature allows you to browse websites and use applications as if you were in another country.

Whatsmore, betternet is able to deliver a robust and dependable service since it controls all of the software and hardware it operates.

The following is a list of key features on Betternet premium VPN:

To learn more about the VPN visit betternet.co.

NordVPN is inspired by the Nordic values of confidence, trust, and innovation. With over 14 million users worldwide, it is one of the most reputable internet security companies on the market. NordVPN is acknowledged by prominent tech blogs and IT security professionals for its solid ideals and carefully considered features.

NordVPN was a founding member of the VPN Trust Initiative (VTI). VTI’s mission is to educate the public about cybersecurity while also creating quality standards for the whole VPN business. One NordVPN account can secure up to six devices at once, giving you six times the security.

No matter what operating system you use – Windows, macOS, Android, iOS, or Linux – NordVPN will mask your location, IP address and encrypt your traffic.

In order for users to take precautions online to protect themselves and their data when accessing applications, websites, and more in a secure manner.

Below is a list of the most popular features on NordVPN:

To find out more visit Nordvpn.com.

Surfshark VPN has over 3200+ servers in 65 countries. The service includes sophisticated security features, dependable network and speeds, unblocking abilities, and a strong dedication to customer privacy and security.

Users may also connect as many devices as they like simultaneously. Providing unique features, developing intelligently designed apps, and emphasizing client privacy are just a few of the services available.

The true merits of Surfshark are the features that are uncommon amongst standard VPNs. To illustrate, Whitelister is a split tunneling application that allows you to control which apps and websites use your VPN connection. This is useful since certain websites prohibit VPN access.

The following is a list of key features on Surfshark VPN:

To discover more about the service visit Surfshark.com.

Customers are not always aware of what happens behind the scenes of a VPN service. Several scandals in recent years have rocked the VPN sector, increasing user skepticism of the services.

However, this is counterbalanced by the developments in technology which in turn leads to improved VPN service. Consequently, consumers put more trust into service in order to safeguard their online identity and bypass certain geo-location restrictions.

Mobile VPNs each have their own benefits, features, and perks that set them apart in the market. On the other hand, consumers should be more aware of their digital footprints, and with a VPN, they may choose where they wish to leave theirs online.

Personal taste in terms of features, services, and price subscriptions play an essential part when choosing the fastest mobile VPN provider. So turn on the VPN, surf the Internet, download files, view movies, and enjoy a speedy connection with one of the aforementioned top 5 mobile VPN apps.