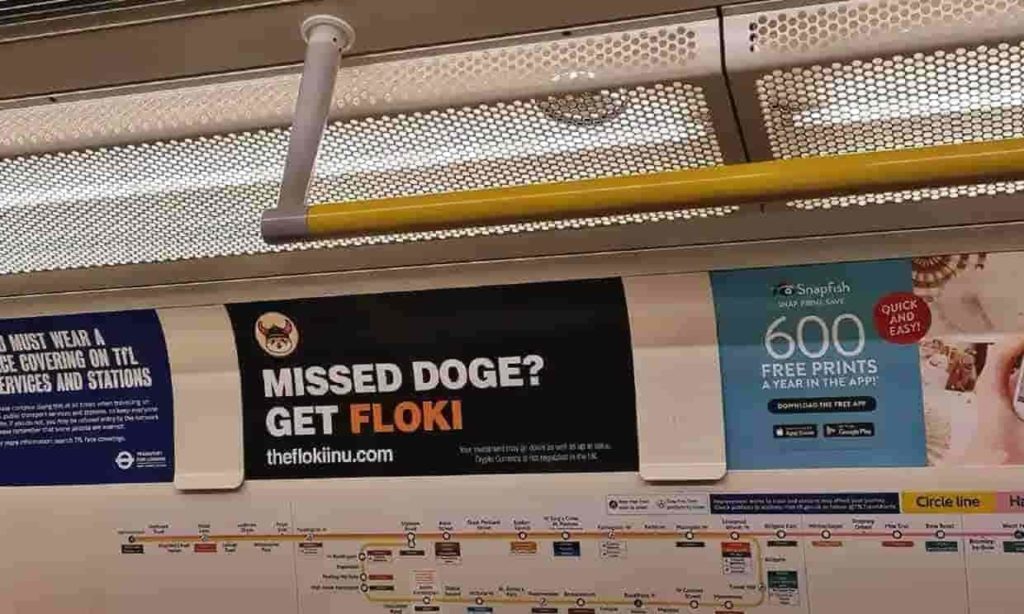 A review of advertisements for the Floki Inu (FLOKI) cryptocurrency that were placed on public transportation in London is underway by the Advertising Standards Authority (ASA), according to BBC reports.

Indeed, the ASA is scrutinizing “a broad body of advertisements in this sector”  to determine whether or not they violate advertising regulations.

Although the team behind the Floki Inu cryptocurrency advertisement campaign claimed that they had been “legally cleared.”  The developers stated:

“These ads also include a clear disclaimer highlighting the volatility of cryptocurrencies.”

Worries over the legitimacy of the token

Doubts over the legitimacy of the crypto token had surfaced after no information about its developers could be found online; however, on this note, Floki Inu informed the BBC in an email:

“Our decision not to prominently feature team members on our website is intentional: to make it clear that Floki is the people’s cryptocurrency and a movement focused on them.”

It claimed that its “legal entity” was based in Georgia and that it had shared this information with “strategic partners” during know-your-customer checks.

Floki’s lead developer, according to the email, is Jackie Xu, who lives in the Netherlands. The email continued:

“The Floki team isn’t entirely anonymous as is being purported, but some of our team members chose to be anonymous temporarily because they do not want the distractions, and for security reasons.”

Transport for London (TfL) had been asked to restrict advertisements for unregulated financial products following the completion of a three-week poster campaign by Floki. The U.K. capital’s transportation operator has stated that there have been no widespread complaints from the public about crypto ads.

However, some politicians in the U.K. have expressed concerns that the TFL should not have approved the advertisements for Floki Inu. A member of the Green Party’s London Assembly delegation, Siân Berry, put forward a question to Sadiq Khan, the mayor of London on the matter:

“Where the advert says ‘this is completely unregulated, you may lose all your money,’ they ought to have had second thoughts. I don’t think cryptocurrency ads should be on the network. They’re unethical.”

What exactly is Floki?

Floki Inu is a cryptocurrency named after Tesla (NASDAQ: TSLA) CEO Elon Musk’s Shiba Inu dog; as a result of his support for the meme cryptocurrency Dogecoin which has a Shiba Inu as its mascot, Musk has been dubbed “the Dogefather.”

On June 25, Musk wrote on Twitter, “My Shiba Inu will be named Floki.” Tesla CEO Elon Musk responded with a tweet on September 12 that read, “Floki has finally arrived.” Both an ERC20 token and a BEP20 token are available for FLOKI users.

In order to fight the problem of crypto scams, the chairman of the Financial Conduct Ability (FCA), Charles Randell, called on ministers to give the FCA the authority to monitor crypto-assets after Kim Kardashian was paid to promote Ethereum Max, a token that had been established a month earlier by unknown developers.

Following the release of the Netflix (NASDAQ: NFLX) series Squid Game, a cryptocurrency based on the show garnered widespread attention at the end of October, propelling the coin’s value by 310,000% in a single day, reaching $2,856, according to CoinMarketCap.

A few days later, the value of the SQUID token dropped to zero within minutes as the unknown scammers who developed it departed, allegedly with a profit of at least $2 million.