May was challenging for bitcoin, with the digital currency undergoing a correction of over 50% from the all-time high price set in April. With the slump alongside increasing regulatory concerns, bitcoin miners were slightly hit with reduced revenues.

Data acquired by Finbold indicates that bitcoin miners earned $1.45 billion in May, dropping only 15.01% from the April figure of $1.7 billion. The revenue dropped slightly considering bitcoin suffered a significant price correction of about 36% in May. Between March and April, the revenue slightly plunged 2.5% from $1.75 billion to $1.7 billion.

Over the last three months, the highest daily bitcoin mining revenue was on April 15th at $77 million. The lowest returns were recorded on May 29th at $26 million.

Last month, it was expected that mining revenue would plunge significantly as cryptocurrency critics focused on bitcoin’s energy consumption. Questions on bitcoin’s carbon footprint were accelerated by Tesla CEO Elon Musk, who announced the electric vehicle manufacturer would no longer accept bitcoin for payments. Musk cited bitcoin’s environmental impact as the driver for the suspension.

The development impacted bitcoin’s value, considering that Tesla invested about $1.5 billion in digital currency early this year. Musk, who has been a big bitcoin proponent, noted that the company is looking for energy-efficient crypto to replace bitcoin. The move is viewed as consequential and might turn away institutional investors. The April and March revenue was recorded with bitcoin surging in value amid interest from institutions.

Historically, when the bitcoin price drops, the interest in the asset also declines hence fewer transactions to confirm. Elsewhere, the surge in bitcoin mining revenue for previous months correlated with the cryptocurrency’s sustained bull run as more people attempted to get involved over the fear of missing out. In such scenarios, the bitcoin network usually experiences congestion, with miners focusing on maximizing profits.

Furthermore, bitcoin mining and the entire cryptocurrency sector faced a renewed crackdown in major markets like China. Notably, China accounts for a large share of global bitcoin mining, but authorities are now viewing the exercise and cryptocurrencies at large as a threat to financial stability. Consequently, authorities in regions dominated by mining like Inner Mongolia have proposed new strict regulations to govern the exercise.

Although the crackdown in China partly contributed to the slump in bitcoin mining revenue, the full effect might be exhibited in June. However, the exercise should pick up, especially with renewed efforts to cement other markets like North America. The region is ramping up to dominate bitcoin mining with a focus on using renewable energy.

For instance, Musk is leading efforts in North America meeting with the region’s bitcoin miners. There is a commitment to publish current and planned renewable energy usage.

What does the future hold for bitcoin mining revenues?

The bitcoin mining revenue is encouraging, considering that the industry has witnessed a decline in profitability over recent years. However, with the regulatory crackdown on mining, the industry risks slowing down on revenue since large-scale miners are mostly targeted by authorities.

With the increased focus on renewable energy for bitcoin mining, the asset might attract more institutions, potentially sparking an increase in value and consequently the mining revenue. 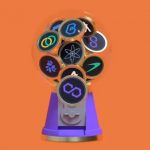 Revolut adds Chainlink, Polygon, Algorand, and 5 more tokens to trade via its app