These numbers indicate a month-on-month (MoM) growth of 5% and a year-on-year (YoY) growth of 87%. While China offered tax incentives on mainstream internal combustion engine (ICE) vehicles, the demand for NEVs grew, among other things, due to high oil prices.

Leaders of the pack

Similarly, retail sales of NEVs for September show that it will reach a record of 580,000 units sold, representing a 73.7% increase YoY, compared to 340,000 units sold a year ago. Considering that most auto companies in China were negatively impacted by the zero-Covid policy and lockdowns, these numbers look even better.

Positive signs out of China

Tax breaks and incentives by the government spur consumers to turn to NEVs, and Chinese companies to be more confident and competitive in the marketplace. Notably, domestic auto brands registered robust growth and an increase in market share, as Tesla seems to be the only ‘foreign’ brand competing in the Chinese NEV market, remaining the runner-up in sales and delivery numbers to BYD.

Furthermore, these sales numbers support the thesis of positive signs coming out of China, despite industries, in general, being negatively impacted by the war in Ukraine, inflation, supply chain issues, and the more recent Covid lockdowns across China. 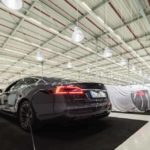