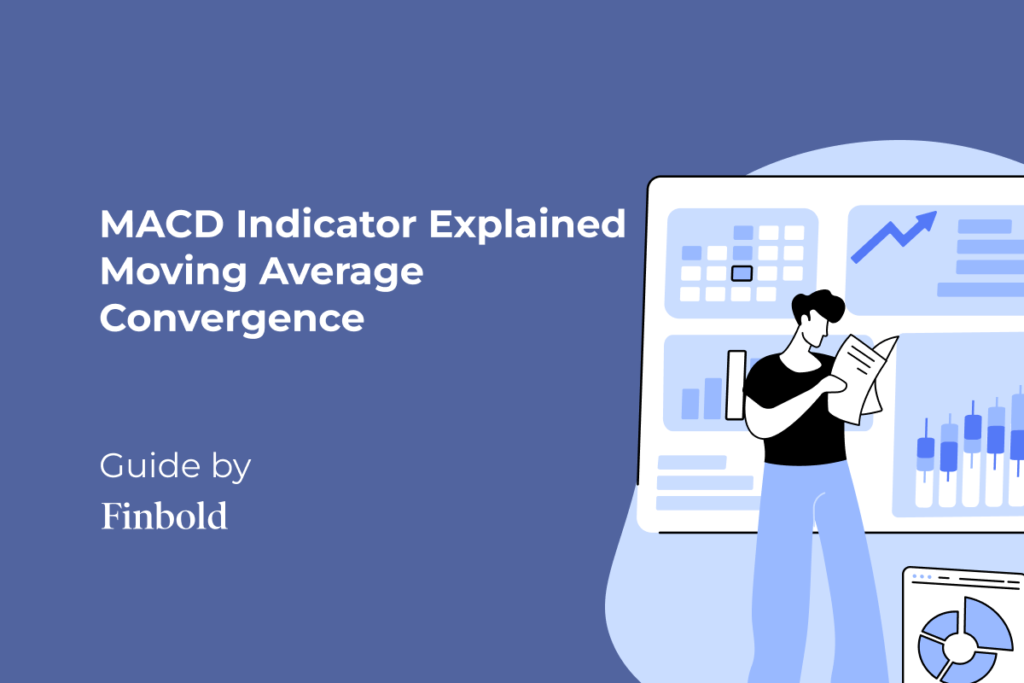 The following guide will examine the moving average convergence divergence (MACD), what it is and what it measures, how to understand the indicator on charts and interpret those findings, as well as the pros and cons of using this technical analysis tool.

What is the MACD indicator?

The moving average convergence divergence is a technical analysis tool used in stock trading created by Gerald Appel in the late 1970s. The MACD is both a trend and momentum indicator/oscillator that shows the relationship between two moving averages (MA) of an asset’s price. The MACD line results from subtracting the 26-period exponential moving average (EMA) from the 12-period EMA.

Because the MACD indicator tracks past pricing data, it falls into the lagging indicator category. Therefore, the MACD is less useful for stocks that are not trending (trading in a range) or are trading with unpredictable price action. Nevertheless, the indicator can demonstrate whether the bullish or bearish movement in the price is strengthening or weakening and help spot entry and exit points for trades.

Traders may interpret the MACD indicator in various ways, but the more common techniques are crossovers, divergences, and rapid rises/falls.

Key terms to understand as we move on with the guide:

How is MACD calculated?

While 12, 26, and 9 are the typical value settings used with the MACD, traders can opt for other values depending on their trading style and goals.

Assuming the standard time ranges, the MACD is calculated by subtracting the value of a 26-period exponential moving average from a 12-period EMA. Both moving averages use closing prices of the period that is measured.

The MACD histogram illustrates the difference between MACD and the signal line. It is calculated by subtracting one from the other. The histogram is made of a bar graph, making it visually easier to read and interpret.

Note: The histogram bars have nothing to do with the trading volume of the asset.

How to use the MACD indicator?

MACD helps reveal subtle shifts in the strength and direction of an asset’s trend, guiding traders on when to enter or exit a position. The indicator can be interpreted in several ways, but the more common methods are crossovers, rapid rises/falls, and divergences.

So, while the signal crossovers can be helpful, they are not always reliable. Therefore, it is also worth considering where they occur in the chart to minimize the risks. For instance, some traders wait for a confirmed cross above the signal line to avoid entering a position too early.

Namely, if the crossover indicates an entry point, but the MACD line indicator is below the zero line (negative), market conditions are still likely to be bearish. On the other hand, if a signal line crossover suggests a potential exit, but the MACD line indicator is above the zero line (positive), market conditions may still be observed to be bullish.

The MACD rapid rises or falls occur when the underlying short-term moving average pulls away from the long-term moving average and may signal an overbought or oversold condition. But, because the MACD is a lagging indicator, traders typically compare this analysis with additional technical indicators like the Relative Strength Index (RSI) to verify if the overbought or oversold conditions.

A divergence occurs when the MACD forms highs or lows that diverge from the corresponding highs and lows in the underlying asset’s price.

Bullish divergence happens when the MACD forms two rising lows that align with two falling lows on the asset’s price, suggesting that the buying pressure is stronger despite the fall in price. Bullish divergences tend to lead to price reversals, possibly signaling a change in the trend.

On the other hand, a bearish divergence occurs when the MACD forms two falling highs that correspond with two rising highs on the security’s price, signaling that despite price growth, buying pressure is not as strong as it was. Bearish divergences during long-term bullish trends (not as reliable during bearish trends) can indicate weakness in the trend.

There are several problems with trading divergences. Firstly, divergence can often signal a false positive, i.e., a possible reversal, but no actual reversal occurs. This is because prices often demonstrate a few surges or plunges as market participants set off stops to match the supply and demand in the order flow. Secondly, divergence doesn’t forecast all reversals, i.e., it predicts too many reversals that don’t occur and not enough real price reversals.

Indeed, using a divergence signal as a forecasting tool can be relatively unreliable. A divergence trade is not as error-free as it appears in hindsight since past data will only include successful divergence signals. Therefore, visual inspection of past chart data won’t give any insight into failed divergences since they no longer appear as a divergence.

One reason traders frequently lose with this setup is that they enter a position on a signal from the MACD but exit it based on the movement in price. Remember, price is the ultimate indicator, with momentum indicators (the MACD histogram is a price derivative and not the price itself) only manipulating price data. Therefore, it is recommended to use price action to assist with trading decisions when using the MACD.

Let’s look at some critical guidelines for doing so:

Remember, divergence is an imperfect tool that may provide beneficial insight into some trades but not others. Therefore, it is essential to understand its weaknesses, as well as compensate for its shortcomings by analyzing price action.

Note: Fakeout is a technical analysis term referring to a situation in which a trader enters a position in anticipation of a future price movement that ultimately doesn’t happen. In fact, often, the price goes in the opposite direction of the trade signal.

Pros and cons of the MACD indicator

Like most other technical analysis tools, the MACD indicator also comes with its own distinct advantages and disadvantages. To fully harness this momentum and trend indicator to its maximum capability, it’s essential to understand where it triumphs and where it can fall short.

Finally, the MACD indicator is one of the most valuable technical analysis tools, identifying both market trends and momentum. As a result, it can assist in determining trend reversals and defining potential entry and exit points for your deals.

However, like with most technical indicators, the MACD is not always accurate and may provide numerous false and misleading signals, particularly during weak-trending or sideways price action. Therefore, to mitigate risk and confirm the signals further, traders should use the MACD in tandem with additional indicators, such as the RSI indicator.

FAQs about the MACD

What is the MACD indicator?

The moving average convergence divergence (MACD) is a technical indicator that shows the relationship between two moving averages of an asset’s price. Its purpose is to reveal changes in a trend’s direction, strength, momentum, and duration in the underlying security’s price.

How is MACD Calculated?

The MACD is calculated by subtracting the value of a long-period exponential moving average (EMA) from a short-period EMA. Both moving averages use closing prices of the period that is measured.

What is the standard MACD setting?

The standard value settings for the MACD are 12, 26, and 9, i.e., the shorter exponential moving average is taken over 12 time periods, the longer over 26 time periods, and the signal line is calculated from a 9-period.

What is the MACD histogram?

A MACD histogram is a graph representing the distance between the MACD and the signal line, i.e., the divergence and convergence between the two. The histogram helps traders identify momentum in the trend.

What's the difference between the MACD and RSI indicators?

The MACD and RSI are both trend-following momentum indicators often used in tandem to give analysts and traders a better technical understanding of market conditions. While the MACD measures the relationship between two moving averages, the RSI measures price change in relation to recent price levels.

How does MACD indicate divergence?

How does the MACD provide traders with buy/sell signals?

What are the limitations of the MACD?

One of the primary problems with MACD divergence is that it can frequently signal a possible reversal, but no actual reversal occurs, meaning it produces a false positive. Additionally, divergence cannot forecast all reversals. Ultimately, it seems to predict too many reversals that don’t occur and not an adequate amount of actual price reversals.