Dogecoin’s (DOGE) price performance during the 2022 bear market was substantially better than that of the vast majority of the crypto industry’s leading assets. After XRP, the meme coin had the third performance within the top 10 list of cryptocurrencies.

Dogecoin also surpassed its most significant rival, Shiba Inu (SHIB), which is notable given that the SHIB community was focusing on metaverse and blockchain games as well as establishing a layer-2 network. Since the start of 2023 DOGE has added $0.011 to its value and investors will be hoping for more of the same heading into February.

In particular, the machine learning algorithms at the crypto tracking platform PricePredictions 30-day forecast indicates that Dogecoin will trade at $0.0833 on January 31, 2023, an increase of about 2.5% from DOGE’s value at the time of publishing.

The AI price projection is based on technical indicators such as moving averages (MA), relative strength index (RSI), moving average convergence divergence (MACD), and Bollinger Bands (BB), among others.

At the moment, Dogecoin is facing a resistance at $0.091, and if the price breaks above the position, the asset is likely to embark on a bullish uptrend towards the $0.1 mark.

Elsewhere, the one-day gauges on TradingView are still bullish for Dogecoin. The summary of the gauges is in the ‘buy’ zone at 11, while moving averages are for ‘buy’ at 9. Oscillators indicate ‘neutral’ at 8.

After profiting from Elon Musk’s purchase of Twitter (NASDAQ: TWTR), if the original conjecture of the token being integrated as a payment option on the social media platform is fulfilled, it may see a further price increase, but for now this remains speculation.

Elsewhere, Dogecoin might get a bullish upswing as the community focuses on new products such as Libdogecoin, Dogecoin Standard, and GigaWallet, among others. 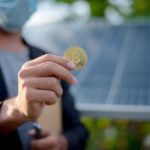 Want to mine Bitcoin using solar panels? Here’s how many you'll need