Bitcoin (BTC) has kicked off 2023 on a positive note sustaining short-term gains, although the flagship cryptocurrency continues to trade below crucial support levels. Notably, Bitcoin gains in the first week of 2023 can be attributed to the positive macroeconomic data around the United States employment news.

Moving into the second week of 2023, it is worth noting that Bitcoin’s price action is likely to be dictated by more macroeconomic news, with the Consumer Price Index (CPI) and inflation data for December expected to come out.

In this line, crypto trading expert and analyst Michaël van de Poppe has stated that Bitcoin’s odds of breaking out have increased while explaining what traders planning to trade in BTC the following week should be aware of, he said in a YouTube video posted on January 7.

However, according to Poppe, despite the impressive breakout odds, Bitcoin is likely to test sideways trading for a while, noting that the $17,000 target remains possible. Overall, he said Bitcoin is expected to continue rallying.

“We got a clear resistance at $16,950, and we got a support area here around $16,760. So it seems apparent that we’re going to stay sideways for a little bit before we can start breaking out because the odds of breaking out have increased given the fact that we are testing the resistance multiple times already,” he said.

However, with CPI data expected to be positive, the analyst states that Bitcoin will likely continue on a big run to target $17,800 while noting the push can be boosted by increased buying pressure. Notably, the data will influence the Federal Reserve’s next monetary policy, with Poppe warning that a weaker economy will likely result in more interest rate hikes.

Indeed, the minor weekly gains helped Bitcoin move away from the sideways trading pattern that characterized the asset towards the end of 2022. In this line, Bitcoin has been attempting to break the $17,000 resistance, focusing on hitting the $18,000.

Elsewhere, the Bitcoin technical analysis on TradingView is mixed. A summary of the one-day gauges recommends the ‘neutral’ sentiment at 7 while moving averages are for ‘buy’ at 8. Oscillators are for the ‘sell’ sentiment at 4.

In the meantime, as Bitcoin attempts to sustain the recent rally, it’s worth noting that the machine learning algorithm at PricePredictions indicates that BTC might end the first month of 2023 on a bearish note. According to the 30-day forecast, Bitcoin might trade at $15,532 on January 31, 2023.

Overall, investors will be hoping Bitcoin has found a bottom to rally again from the lows of 2022. Interestingly, despite the bearish market, Bitcoin’s blockchain managed to record transactions of over $8 trillion in 2022.

Furthermore, there are prevailing fears that the fallout from incidents such as the FTX collapse could impact the market further. 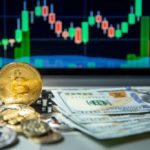 Top 5 most popular new cryptocurrencies as of January 6, 2023