As the first week of 2023 ends, most cryptocurrencies have traded in the green zone after massive sell-offs over the past year. Notably, some assets aim to build on the fuel that has inspired a mini-rally as a foundation for sustained gains.

In particular, several digital currencies are already standing out, aided by the specific narrative they drive alongside increasing use cases. Therefore, below are the top five cryptocurrencies to watch for the week of January 9.

The flagship cryptocurrency is leading the market in gains after receiving a boost from positive employment data in the United States. Although Bitcoin (BTC) is trading in the shadow of the previous highs, the crypto has sustained solid gains across 2023. At the same time, as the new week starts, Bitcoin’s price remains of focus, especially with more macroeconomic data expected to come out. In this line, the upcoming Consumer Price Index (CPI) and inflation data will likely influence the Federal Reserve’s monetary policy and consequently risk assets like Bitcoin.

Notably, as reported by Finbold, crypto trading expert and analyst Michaël van de Poppe stated that inflation data is likely to be good and might spell good fortunes for the asset. Overall, the analyst pointed out that Bitcoin has higher odds of breaking out in the coming week after testing key resistance levels while targeting $17,000.

Based on the recent price movement, Bitcoin is attempting to put behind the sideway trading pattern and break above $17,000. However, it is worth noting that moving into 2023, Bitcoin is still facing a cloud of uncertainty, considering the threat of an extended sell-off from incidents such as the FTX crypto exchange collapse and the Fed’s next policy. However, Bitcoin will look forward to building on milestones achieved in 2022 despite the bear market.

From a technical analysis perspective, Bitcoin offers mixed signals on the daily gauges. A summary aligns with ‘neutral’ at 8, while moving averages are for ‘buy’ at 8. Elsewhere, oscillators recommend the ‘sell’ sentiment at 3.

The decentralized finance (DeFi) token appears to defy recent concerns about its future due to close ties with the now-collapsed FTX crypto exchange and its founder Sam Bankman-Fried. Indeed, the concerns resulted in SOL dropping to as low as $8. However, part of the current resurgence resulted in Solana witnessing an over $1.5 billion capital inflow within a week as of January 6.

Although SOL has historically rallied in line with the general market, the latest price movement is heavily linked to the hype around the Bonk (BONK) meme cryptocurrency that seeks to emulate Shiba Inu (SHIB). Notably, after BONK was airdropped to Solana non-fungible token (NFT) communities and creators, SOL recorded a surge in value and trading volume.

Therefore, moving into the new week, SOL remains an asset to watch, and the sustainability of the BONK hype. This is vital considering that SOL has no other possible specific bullish triggers for a rally while the effects of FTX collapse are lingering; the network is also facing scrutiny over the constant outages that characterized the platform in 2022.

Amid the short-term gains by SOL, the machine learning algorithm at PricePredictions indicates that SOL is likely to be in a consolidation phase at the current price by the end of the month. The forecast suggests that SOL will trade at $13.75 on January 31, 2023.

Elsewhere, Solana’s one-day technical analysis summary indicates the ‘buy’ sentiment at 10, while moving averages are also for buying at 8.

Lido DAO, the liquid staking solution for Ethereum, has spiked in value and market cap, to the surprise of most investors. Although the native token of Lido Finance has also moved in accordance with the general market, the latest rally can be linked to the upcoming Ethereum Shanghai upgrade that saw developers set a date before March.

Consequently, moving into the week of January 9, investors need to monitor the asset to see if it will sustain the gains. At the moment, the token is facing the possibility of experiencing selling pressure, with the likelihood of investors taking profits remaining high.

By press time, Lido DAO was trading at $1.61 with daily gains of almost 8%. The weekly chart shows that LDO was up over 60%.

Based on TradingView’s technical analysis, LDO is facing bullish sentiments. A summary of the daily gauges is for a ‘strong buy’ at 16, similar to moving averages at 14. Oscillators are ‘neutral’ at 8.

Ethereum Classic’s (ETC) latest rally has seen the Ethereum fork reclaim $20, a position considered a fundamental support level for the asset. Although the trigger for the rally remains vague, ETC has witnessed increased network activity that might influence the price movement.

Notably, the network’s hash rate has spiked recently, translating into a possible surge in miner profitability. It’s worth mentioning that following the Ethereum Merge upgrade, ETC has stood out to benefit, considering ETH miners need minimal upgrades to start mining on the network.

Furthermore, ETC’s price could be benefiting from a short-squeeze approach from its community. For instance, data from the crypto analysis platform Santiment noted that ETC had witnessed increased trading volume alongside being shorted significantly by traders. Therefore, with no formidable trigger, focusing on ETC price will be essential, especially if traders start taking profits.

Furthermore, ETC technical analysis offers mixed sentiment with a summary aligning with ‘neutral’ at 9. Moving averages are for ‘buy’ at 9.

Across 2022, Cardano (ADA) attained several milestones, with the network recording sustained development activity that is considered a key catalyst for a possible price rally. Consequently, in the first week of 2023, ADA’s price has gained double digits. It is worth noting that Cardano’s value has mainly followed the general market sentiment in its price trajectory.

Interestingly, ADA has rallied despite the Cardano network being embroiled in an NFT controversy. In particular, founder Charles Hoskison was at the center of attention after initially declining to buy an NFT that he had used for his profile picture on Twitter.

Although the rally trigger cannot be instantly identified, ADA’s gains can partly be linked to the Cardano DeFi ecosystem expansion. In this line, ADA’s total locked value has recently witnessed minor gains.

At the same time, investors’ interest in ADA might be increasingly triggered by sustained whale activity in the token. In the meantime, Cardano continues to rank among cryptocurrencies with the highest development activity on GitHub. Overall, ADA is the center of attention moving into the next week, as the focus will be on the sustainability of the gains.

The latest gains have thrust ADA technical analysis into the bullish zone. A summary of the daily gauges on TradingView is for ‘buy’ at 12, similar to moving averages at 9.

In general, the week of January 9 is huge for the crypto space considering the implication of the upcoming inflation data and how the Federal Reserve will respond. At the same time, the focus will be on how the market reacts to any regulatory outlook considering the Fed recently warned banks against engaging with crypto. 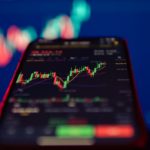 Planning to trade Bitcoin next week? Be ready for this